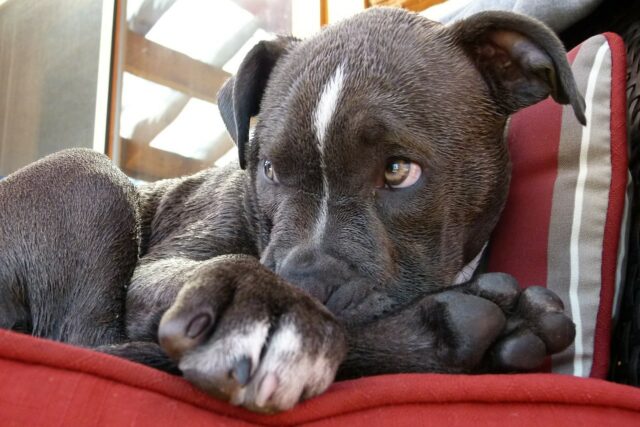 Raisin was a puppy that had one eye and was left at the local vet. She was very young so she needed a mom. Daya, on the other hand, was a recently rescued stray dog that was pregnant. Unfortunately, her body rejected her litter and she became depressed.

The shelter saw this as an opportunity to pair Raisin and Daya together. They hoped that the dogs would help each other get better.

Katie was a good friend of the shelter manager. Once she found out about Raising and Daya’s situation, she offered to take care of them both and open her house for them.

Katie was nervous about how Daya and Raisin would react to each other in a new environment. It took a few moments before Daya began to lick Raisin’s face and took the little pup into her arms.

Raisin responded with the same amount of love for her mother figure. Katie’s worries all washed away and she knew things were going to get better.

Daya and Raisin spent every waking moment together. Daya treated Raisin as her own daughter and taught her how to play and act around other dogs.

As a few days passed, Katie already saw improvements from both dogs. Daya seemed happy and emotionally stable while Raisin was more confident and playful. They both definitely benefitted from each other’s company.

Once Katie felt that Daya was stable enough, she looked at several people’s applications to adopt Daya. Daya went to a wonderful loving family that made sure Daya’s happiness was their priority.

Katie was also looking for Raisin’s forever home until she realized that Raisin held a special place in her heart. She couldn’t bear the thought of Raisin leaving, so instead, she officially adopted the pup.