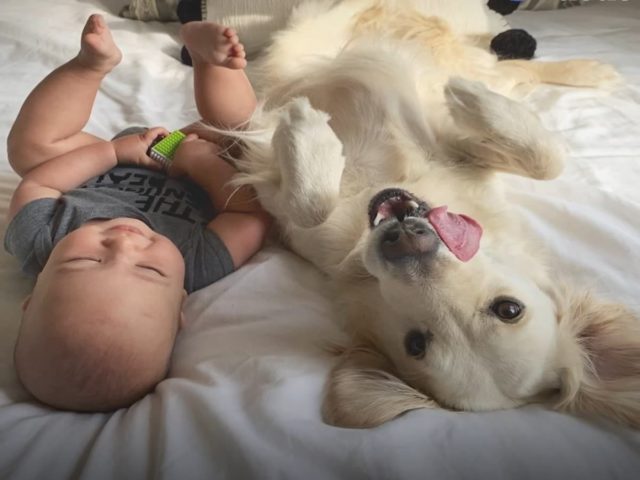 Harlow, the golden retriever, loved his human baby brother from the moment she laid her eyes on him. Harlow was so ecstatic to see her fur parents arrive from the hospital, and she immediately went to the baby carrier to check on her sibling as soon as she smelled the newest addition to their family.

Harlow knew from the very beginning that she should be keeping an eye on her little sibling, 24/7. Harlow’s humans even shared that they always find Harlow kissing their baby’s foot.

Harlow’s fur mom believes that the dog must have picked up her maternal instincts because she always watches her baby brother like a hawk. Harlow was so protective of his sibling and made sure that her sibling is safe from any harm.

Harlow always follows her little brother wherever he goes and even made sure that she was his shadow. Harlow acted not only as her baby brother’s big sister but also his bodyguard.

Harlow’s fur parents introduced the trampoline to her and their son, and Harlow went crazy. She could not stop bouncing all around and doing zoomies on the trampoline.

The pair’s parents shared that their son loves to play with their dog every single day. They said that their baby would always laugh at just by looking at Harlow.

Harlow’s parents recalled that they recently bought a wagon for their son’s birthday, and the duo enjoyed their morning rides in it. Harlow’s parents admitted that she is lazy, and they were right because it was evident that their dog loved every moment of it.

The duo’s parents shared that their son loved sneaking out some treats for Harlow. Sometimes, Harlow would even lick her little brother nonstop if she is seeking attention, and their parents are thankful that their baby developed a genuine friendship with their dog.