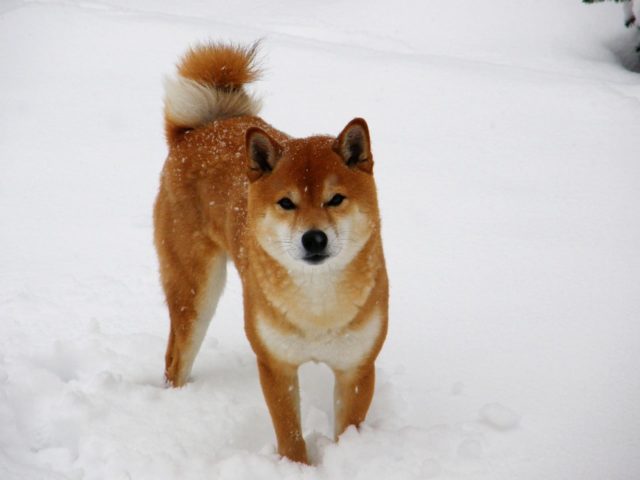 Sometimes, animals and technology don’t mix until the animal learns to trust the technology in front of him. Until then, the piece of technology we humans so enjoy remains unknown, and even unpleasant, to an animal we love.

Our story is about a particular dog’s interactions with a robot vacuum. As we all know, robot vacuums are very helpful home devices that help clean up the mess we have and maintain our home’s cleanliness.

One certain Shiba Inu named Haru was introduced to a robot vacuum one day when his humans acquired one. While his humans were very excited to see how the robot vacuum works and cleans the house, he wasn’t even interested.

Haru would often sit from a distance, observing the vacuum as it buzzes around while cleaning the house. He would go away if it would come near to him, and will be very cautious as to what this rounded electronic thing is.

One day, Haru’s little human got scared of the robot vacuum that he cried. Haru, being the protective pooch that he is, didn’t run away for himself but instead tried to “scare” the vacuum away by barking at it.

Obviously, the vacuum couldn’t be scared.

Soon, Haru’s human dad wanted to teach him how not to be scared or antagonistic toward the vacuum. He put some of Haru’s favorite treats on top of the vacuum, and let it run like it should, cleaning the house.

At first, Haru couldn’t believe what he was seeing: his favorite treats on top of this machine he considers to be an intruder and enemy! Although he wanted the treats, he couldn’t even approach the vacuum because he disliked it.

Soon, however, things started to change. Instead of looking at the vacuum as an enemy, Haru started putting his focus on the treats above the vacuum. He tried to reach them and grab them using his cute little paws, but he’s having difficulty doing it.

Ultimately, it led him to realize that the vacuum is not an enemy. It is a rounded moving machine that’s like his food bowl — a place where he can eat his favorite treat.