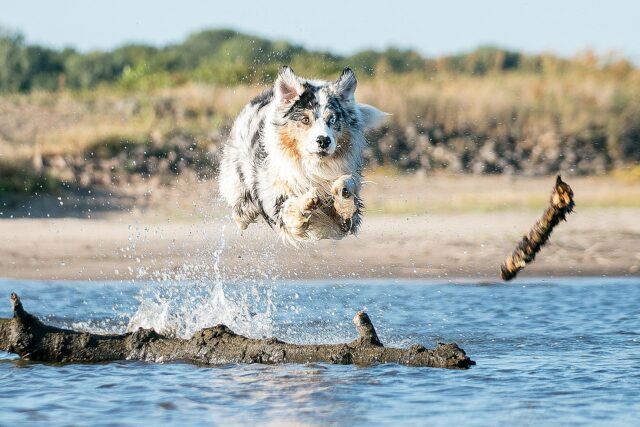 Dogs are very impressive. They have great skills and talents. These abilities of theirs can sometimes leave someone speechless and in awe. Some of them can even do something better than humans can, just like Teddy. Teddy is a better diver than most people, and he’s not afraid to show that he is.

Teddy has always loved going to the beach, especially when he gets to go with his family. He knows that they will be playing games. He also loves that there will always be a time to go and swim.

One of Teddy and his father’s things to do when they go to the beach is to play ball. This is something that both of them look forward to. Teddy’s father would have a ball in his hand, and he would throw it into the water.

Teddy then would happily run after the ball. He would fearlessly dive as he jumps off a plank. His diving skills are making other people look bad. He is so effortless in jumping off and getting into the water.

He would also excitedly swim to where the ball was. Teddy would then pick it up with his mouth and excitedly swim back to his proud father. Teddy’s father is very proud of his little diver.

Teddy may be a small canine, but he is showing everybody that he is a better diver than most people. It is really quite impressive.

Teddy may also be enjoying it because of all the attention that is getting from the family. Who wouldn’t have all the attention when you got mad driving skills as teddy has. His can-do attitude is very inspiring, especially coming from a tiny dog.

His father would continue to bring him on beach trips. He would not get tired of playing with Teddy and showing him off to people.